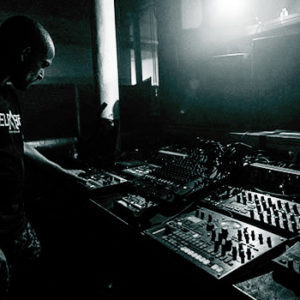 Blending funky breaks, distorted kicks and mental themes into the ultimate dancefloor filling set this hardware wizard is a definite must see….
Growing up in the hiphop scene HEISA aka Nour Fawzi bought a drumcomputer at a very early age and this quickly became quite the passion. In 1996 he first heard acid music and a lifetime love affair with obscure electronic music and especially the production of it was born.

From 1999 the dutch freeparty scene was an enormous influence and by 2002 started doing livesets on these parties.

That same year he released a 12″ record with some friends and from then on it became his mission to push his own limits en develop his skill set. Time passed and he quickly became quite an avid producer. In the studio as well as live he was turning heads.

By the time it was 2008 he was playing in big clubs and freeparties.

Producing a lot of styles of electronic music around 2012 he started on his first full length IDM album. Being picked up by mindtrick records it was released on 2×12″, CD and digital. In 2015 he was invited to play a massive freeparty in france and it was such a succes that the alias HEISA was born.

Now a 2 years later HEISA has been picked up by Obs.cur kicking off the Void sublabel, been playing live back to back and is showing how somebody with 18+ years of experience does an all hardware liveset.